Now in Phase II, the CRDP will focus on funding and evaluating the promising practices identified in Phase I, as well as advancing the strategies outlined in the CRDP Strategic Plan. There has not been a project of this scope before; one that recognizes and elevates community practices and identifies strategies for systems change. Throughout this process, California will present this work on the national stage so that other states can learn from our efforts.  In all, CRDP will award $60 million to 42 contractors and grantees over six years. The CRDP is funded by the Mental Health Services Act (Proposition 63) that was passed in November 2004. This act imposes a one percent income tax on personal income in excess of $1 million. – Office of Health Equity, California Department of Public Health

The first phase of the CRDP focused on developing population specific knowledge about mental health challenges and community-defined solutions. Five population reports were published, which covered the challenges and obstacles each community faced in accessing mental health care and what community programs they developed to meet their community needs. In addition, the first phase developed and amplified a roadmap for reducing mental health disparities through policy change, the Strategic Plan. CPEHN served as the facilitator and writer of the Strategic Plan, which was published in 2018 after the participation of over 7,000 Californians.

Explore the insights created by leading mental health experts with the participation of their communities for each of the 5 CRDP priority populations:

The second phase of the CRDP is intended to develop the capacity of community-based organizations to promote effective mental health strategies and to develop evidence of the success of culturally and linguistically responsive programs and approaches. These approaches are known as ‘community defined evidence practices’ (CDEPs). Aligned with the five priority populations identified in Phase I (African-American, Asian/Pacific Islander, Latino/x, LGBTQ+ and Native American), 7 grantee organizations known as ‘implementation pilot projects’ (IPPs) are contracted with a local evaluator and part of a priority population hub assigned to a ‘technical assistance provider’ organization (TAP). A total of 35 IPPs are directly supported by their hub assigned TAP. The project wide data and evaluation efforts are being led by a Statewide Evaluator team (SWE) made up of a team of researchers from the Psychology Applied Research Center (PARC), a part of Loyola Marymount University.

Additionally, further CRDP-wide support for strategic marketing, capacity building, and overall project promotion is provided through the Education, Outreach and Awareness (EOA) contractor team. The EOA team includes staff from The California Pan-Ethnic Health Network (CPEHN) and designated consultants. These include NORC at University of Chicago, who is developing and implementing a survey on attitudes and beliefs towards the mental health care and system across California. Each of these activities are directed by leadership at the Community Development and Engagement Unit (CDEU), part of the Office of Health Equity (OHE)at the California Department of Public Health (CDPH). 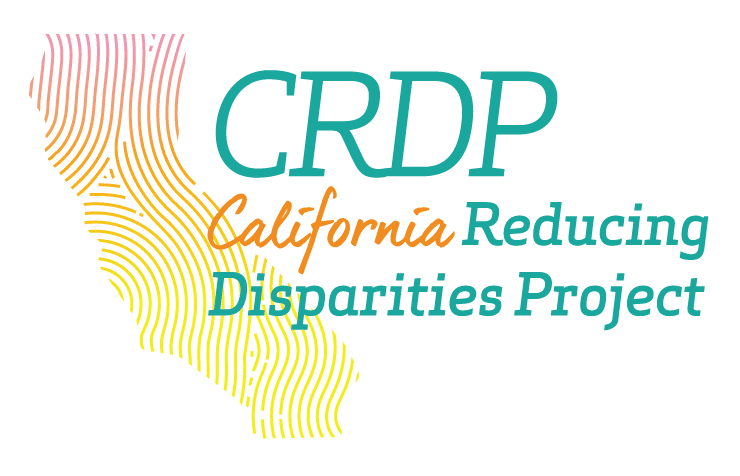 Facebook Twitter Rss
Crafted by Cornershop Creative
We use cookies to ensure that we give you the best experience on our website. If you continue to use this site we will assume that you are happy with it.Ok